That’s the amount of taxpayer money the United States Department of Defense could have saved from 2015 – 2020 according to a January 2015 Defense Business Board report, co-authored by consultants from McKinsey & Co.

Let that figure sink in…

This isn’t money whose federal spending had benign intentions and ultimately failed—this is $125 billion of taxpayer money that could have been saved if the DoD, for example, cut down on exorbitantly priced low-value contracts or updated its technology.

$125 billion, over five years, could have been redirected and spent on everything from building better schools in America to funding domestic environmental restoration projects.

For contrast, in 2015 the federal government spent $8.1 billion on the Environmental Protection Agency, $67 billion on K-12 education, and $4.7 billion on the FDA—you know, the part of the government that ensures our foods and beverages are manufactured safely for human consumption.

The American federal government might have spent nearly two years towards K-12 education as it might have on DoD bureaucratic waste over five years. This number rises to nearly 16 years for the EPA and 27 years for the FDA.

Granted, most funding for K-12 education comes from local governments and municipalities, running deeper than federal funding—however, the fact that our federal government regularly wastes taxpayer money while it doesn’t need to and spends frugally when it needs to is ever-apparent. One would be hard-pressed to find a more accurate archetype than the DoD as we’ll explore further below.

If we’ve got a sublime, supercharged 6.2 liter V8 in our 755 brake horsepower Corvette ZR1 that guzzles 13 miles per gallon in the city and 20 per gallon on the highway, we can decrease or increase our gas mileage depending on how efficiently we drive it.

Believe it or not, she gets better gas mileage on the highway if driven efficiently than most Mercedes and BMWs. No, we aren’t sponsored by Corvette. Am I biased towards American V8s? Yes.
SOURCE: Motor1

USE IT OR LOSE IT

The nonprofit organization Open The Books defines the US federal government’s modus operandi as what’s known as “use it or lose it spending”:

In the final month of the fiscal year, federal agencies scramble to spend what’s left in their annual budget. Agencies worry spending less than their budget allows might prompt Congress to appropriate less money in the next fiscal year. To avoid this, federal agencies choose to embark on an annual shopping spree rather than admit they can operate on less.

Immediately, most of us see a logical problem with this sort of thinking: if a government institution—sworn to serve its citizens—could operate just as efficiently on fewer costs, then why wouldn’t this institution opt for fewer costs?

Particularly one that purports to claim the mantle of responsibility (yes, that’s a line from Halo 5’s Arbiter speaking to John-117)?

The simple answer: risk of being perceived by Congress as obsolete. It’s the classic psychological concept of choice theory: the more one pays for a service, the more one values said service.

Do we remember what the Joker says in The Dark Knight? “If you’re good at something… never do it for free.”

Am I sincerely comparing the Joker to the US government?

Sometimes, those who are sworn to serve our nation’s citizens behave more like the villain than the protagonist…
SOURCE: The Dark Knight

Here are visual representations of this use-it-or-lose-it spending concept: 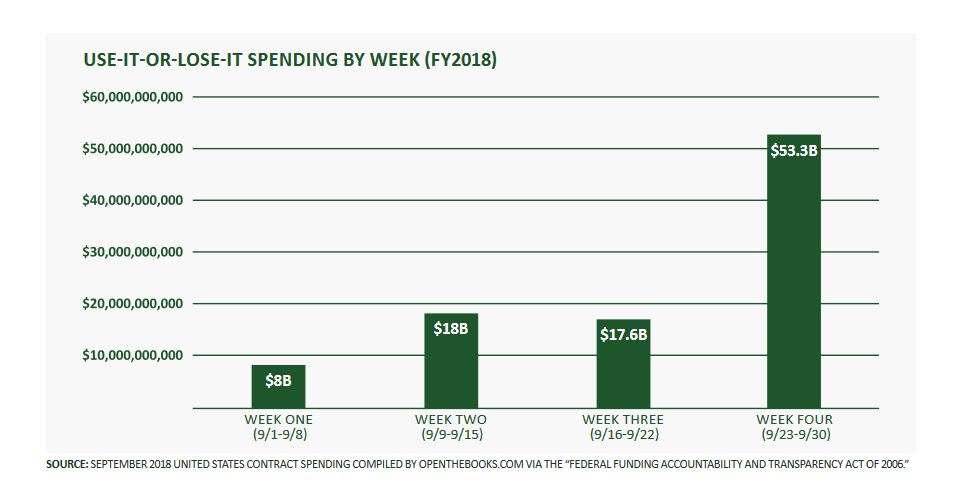 I wonder what the federal government all-of-a-sudden needed to spend on this one week.. right before the fiscal year ends…
SOURCE: Open The Books

This graph represents the exponential hike in federal spending right before the fiscal year ends.
SOURCES: Bloomberg and ZeroHedge

A couple of weeks ago @DD214_MEMES posted a series calling out the leadership of 1st Battalion, 2nd Marines for expecting its junior enlisted Marines to eat moldy foods and stay silent about it. 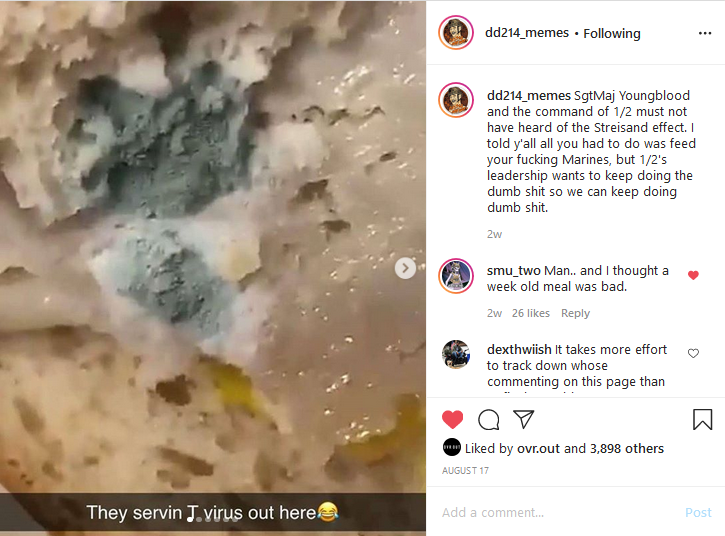 Would we eat this even if we were paying our own month-to-month paycheck for it?
SOURCE: @DD214_MEMES

Most Marines living on-post pay a couple hundred dollars a month—while making 1-2 grand a month after taxes—eating this sort of food while not being allowed delivery of home-cooked meals during this era of COVID.

The US Department of Agriculture reports that moldy foods create mycotoxins—poisonous substances produced by certain molds—the most dangerous of these toxins, aflatoxin, potentially cancer-inducing.

I wonder where these Marines’ collective morale is at. Will they be more prone to re-enlist? Do they feel understood and respected? Are they maximizing their professional productivity?

Ready for some situational irony?

Let’s venture back to the 2019 Open The Books report and the federal government’s “use-it-or-lose-it” budgeting strategy:

In just one month, federal agencies purchased $17.7 million in breads and cereals. Federal agencies splurged on luxury food items before the end of the fiscal year, too. In total, the Department of Defense spent $2.3 million on crab (snow crab, Alaskan king crab, and crab legs and claws) and another $2.3 million on lobster tail. Additionally, agencies spent $293,245 on steak.

These Marines are literally paying out their own pockets for moldy sandwiches and expired rations.

WAIT, SO LET ME GET THIS STRAIGHT…

American taxpayers… yes, us hard-working Americans, reading this post… are…

I’m sure a lot of you share the sentiment that the inverse should be the case: that these DoD employees, and these Marines’ leadership, should be the ones paying out their pockets for expired, rockhard-stale, tooth-chipping sandwiches while the junior enlisted heartily munch on ocean-fresh, savory Alaskan king crab and buttery lobster tail funded by taxpayers—how quickly this issue would be solved if this were the case, hypothetically, is also rather telling (and saddening).

The federal bloat shows itself through another example from the defense sector: in 2016, the DoD awarded over $300 billion in defense contracts.

Collectively, the CEOs of these companies took home a combined $100,000,000 in pay for one fiscal year.

A note: this $300 billion is mostly separate from the aforementioned $150 billion in bureaucratic waste.

We can use our imagination to extrapolate where a lot of this $300 billion in contract money goes.

For contrast, that’s the entire GDP of several small countries.

Again, that’s for one fiscal year for five people funded by taxpayer dollars. It hasn’t gotten much better since 2016—as a matter of fact, the bloated contracts’ prices have only geometrically increased since.

To wrap this section up, let’s look deeper into what some of us professional sports fans (Geaux Saints) see ubiquitously on commercials, halftime shows, and promotions: bumper-sticker patriotism.

In all, the military services reported $53 million in spending on marketing and advertising contracts with sports teams between 2012 and 2015. More than $10 million of that total was paid to teams in the National Football League (NFL), Major League Baseball (MLB), National Basketball Association (NBA), National Hockey League (NHL), and Major League Soccer (MLS).

We’re allowing our congressional Representatives, Senators, and local government assemblymen to condone spending on bloated, wasteful projects while allowing them to be frugal and skimpy spending on assets (like edible food, that our junior enlisted, literally pay out-of-pocket for) or institutions that could really use that spending more effectively (such as the FDA, the EPA, or K-12 education).

BUT WAIT, ARE YOU SAYING ALL GOVERNMENT AND GOVERNMENT SPENDING IS BAD?

I’d argue that myriad government agencies are created, in principle, with the common good in mind.

A people governing themselves is the natural state of humanity’s social interactions (and even if one doesn’t nominally call themselves the government, they colloquially organize as such).

History, no matter where one looks, is replete with such examples. Hell, one could argue that if a family of 30 got-together at a cabin over the weekend, there’d be rules that we’d all play by—which is the foundational bass note of the principle behind government.

The key point here is government accountability; it’s about government transparency. And as we see, our federal government has been arrantly failing us.

Let’s take one last example—one that relates to the COVID crisis that we’re all experiencing.

This Forbes article states about the recent PPP loans issued:

The government hasn’t released the names of successful applicants, but a review of data from the Treasury department shows that construction businesses got $45 billion, more money than any other sector, despite the fact that building projects weren’t halted in most states. Professional scientific and technical was second—there was nothing to keep lawyers, accountants or financial planners from applying, even if they were working from home.

Another surprising group of recipients: publicly traded companies including ones already performing poorly. Altogether we found 71 publicly traded companies that got money. Of that, $75 million went to restaurant chains like Potbelly, Jura Sushi and Texas Taco Cabana as well as Ruth’s Chris, Shake Shack and Wendy’s franchisee Meritage Hospitality.

Were the intentions behind drafting an emergency loan in the public interest? Probably. Were there a number of businesses who received this PPP money while legitimately needing it? Absolutely (including ours).

But does this sort of fraud, corruption, and misappropriation rear its ugly perennially? Unquestionably.

According to a 2018 Federal Voting Assistance Program report:

Furthermore, this FVAP reports that only about 17% of military service members, serving CONUS or domestically as US citizens, voted in the 2018 elections.

If we know who the President and Vice President are but have zero clue who our state Senators, Representatives, and assemblymen are, how can we possibly hope to press political pressure on Congress to be incentivized to listen to us—either through money or votes?

Similarly to how World War I veterans physically protested against government unfairness in 1932 during the Bonus March (which ultimately led to the passing of the G.I. bill), history demonstrates that if we make enough concentrated noise with legitimate grievances… the federal government will have no choice, no service left, but to listen. 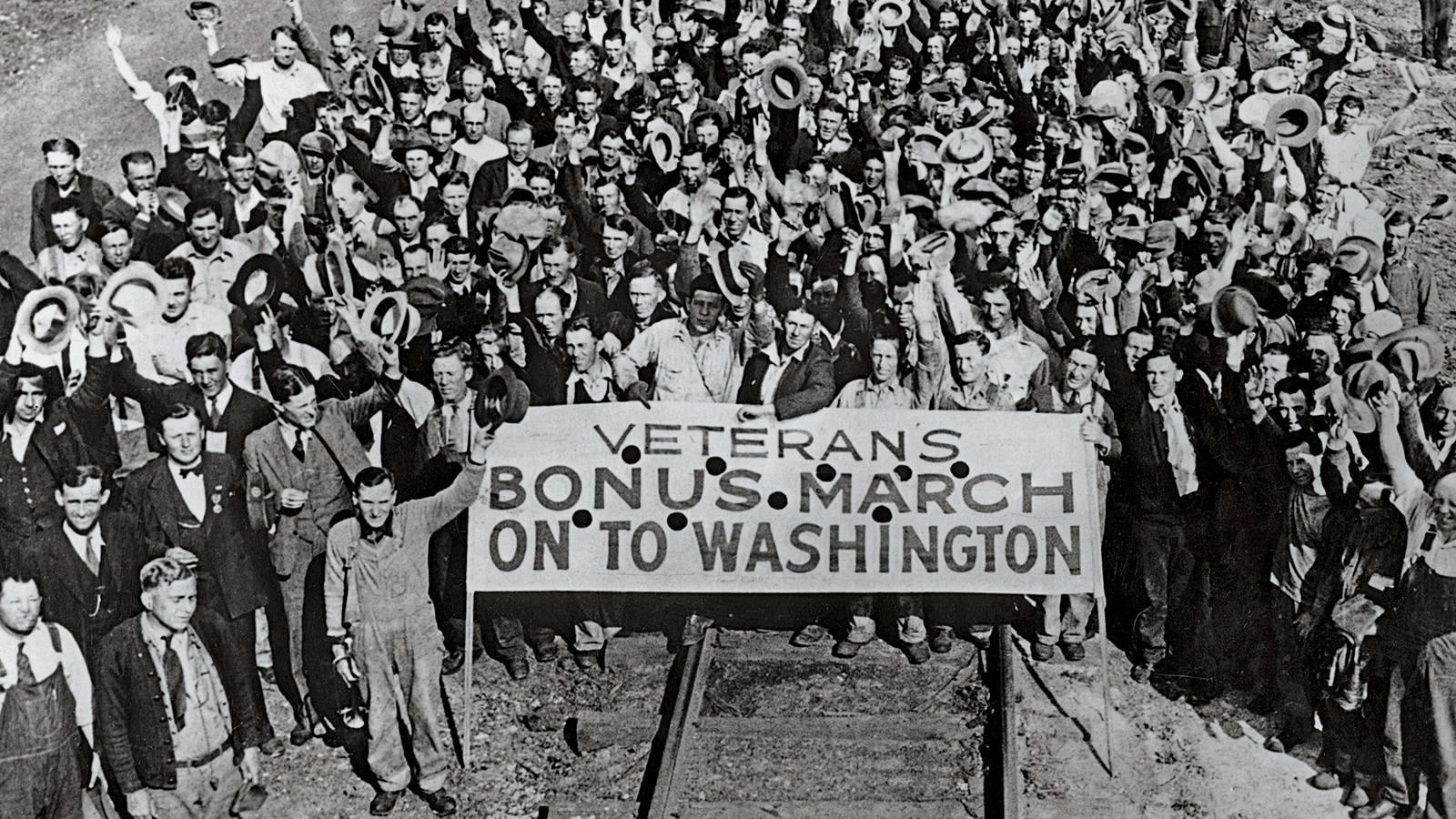 That listening might take time… and the subsequent actions will be imperfect… but what other choice do we have? And if not us.. then who?

The author can be found at his Instagram handle @rooftopnamja. If you have any subject recommendations or feedback he’d love to hear it!

This site uses Akismet to reduce spam. Learn how your comment data is processed.

I never could be certain if it was real or not afterwards. I would fumble through the events of a typical day on auto pilot, as if my mind was…

Washington D.C. – As the press frenzies around the release of pictures purporting to show migrant holding facilities in Donna, Texas, which show hundreds of kids wrapped in space blankets,…